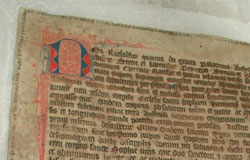 The archives of the Roman-Catholic Church in Austria in comparison to other European states have a long tradition and continuity. The reason is, that actually there were extensive secularizations from the 16th to the 18th century, but these were not as brutal and consequent as in Germany or in France. Therefore many ecclesiastical institutions like foundations, monasteries or dioceses still have their own, nearly complete archives and libraries.

If anybody is interested in a specific document of a special monastery there is no need to go to state archives, the document usually can be found in the monastery archives where it has been preserved for many centuries. There is a quite similar situation in the archives of the dioceses. The archives of the parishes are also content of some Austrian diocese archives (especially St. Pölten, Eisenstadt, Graz-Seckau and Gurk-Klagenfurt).

Because of these reasons Austria and its Roman-Catholic Church has a very colorful system of archives which is part of the general cultural and historical heritage of the country and sees its goal in conserving these valuable objects for further generations.